I chose to come to Koh Tao because it’s known the world over for its amazing scuba-diving. After picking my destination, I just had to figure out the cheapest way to get here. Turns out there was an overnight cargo ferry that left the port city of Chumphon at midnight and arrived at Koh Tao at 6 AM. Of course, traveling with cargo isn’t a very luxurious option, but you get what you pay for: the ticket was a mere 200 baht ($6) – the other (faster) options climbed as high as $20. The added bonus of taking the night boat was that I didn’t have to find (or pay for) a place to stay, so the ticket was more than transportation, it was a place to sleep, sort of…(see photo). 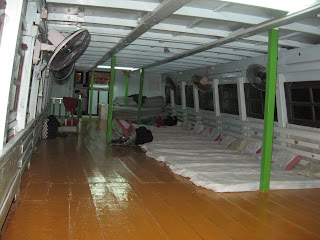 I boarded the boat via a very thin, very slippery metal plank. This plank walk was a bit scary considering a fall into the fiendishly dark waters below would result in the likely destruction or permanent alteration of everything I had. Not to mention possible bodily injury or death. But I survived, as I tend to do somehow. Not long after departing, rain began to patter on the thin windows and soon lightning was crackling across the sky. Now some might think having to spend the night on a wave-rocked cargo ship during a storm would be torture. But for me, it is moments such as these that make me stop and think, “holy shit, I’m sitting on a little mat on a cargo ferry somewhere in the Gulf of Thailand, it’s the middle on the night, there are a six total people on the boat and five of us don’t speak English, we’re in the heart of a thunder storm, and there isn’t a bathroom.” 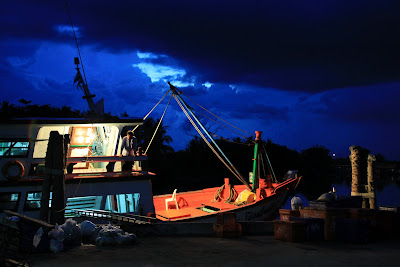 It’s difficult to explain the “why” of travel to someone who has never experienced it. But it is the frequency of moments such as this one, moments that result in a drastic increase in the clarity with which I can see the world, that account for a lot of it. Every breath counts for something, every instant is a new memory unlike any that came before it. There is no “time flies” phenomenon with travel such as this. Brief surprise that the journey has come to an end, perhaps, but not that it’s come to an end already. The days simply cannot blur together to create that dreadful life-mashing effect. Instead, they stand apart bold and true and full of color, entirely different from the days before and the days to come.

I’ve spent three full days on the island now. On day one I took a quick scuba refresher course for 500 baht ($15) which basically involved me jumping into a swimming pool and demonstrating that I remembered how to do everything. On the morning of day two I went out on two dives. There is really something to be said for swimming with giant schools of fish 60 feet below the oceans surface. I write diving off as a splurge as far as my budget is concerned, but it’s still very cheap here relative to other places on the planet. I can get four dives for 2700 baht ($83.40), which comes to about $21 per dive and that’s a good deal. 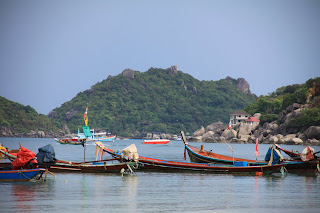 This is the second time I’ve found myself on a dive-centered island while the country’s mainland has been suffering political turmoil. I must say I quite like it. Shout outs go to the lady working the ticket booth for the night boat (I sat and watched a good four hours of Thai soap operas with her while waiting for the boat, and she was nice enough to let me borrow an umbrella), Chris and Dan of the UK (oh Dan, what befell you after your second Sangsom bucket?), Annina and her man from Finland, Divemaster Al who threw me in a pool for my scuba refresher, Tom who is a great dive-master and underwater guide, and also an exceptional guitar player (I heard you at Lotus bar), and that fellow from the South of France who spoke no English but made a good dive buddy. The great thing about being underwater is all communication is sign language, so it’s also a brief but welcome respite from language-barriers.

Final note, I know I have been procrastinating with updating the “Inside the Pack” page. I have not forgotten. It will be updated when I have a fresh battery. Also, technically this post is a day late due to lack of wifi (it was written a day before it was posted). Farewell!

Last thing consumed: Green Curry
Thought fragment: You also have got to love nightly drink specials and live music at every bar.

Did you enjoy reading this post? Subscribe to Wanderlust- A Story of Movement and Adventure via email or with your favorite feed reader by using the menu at the top right of this screen.
What do you think of my latest undertakings? Leave your questions and comments below!

I love your insights and your comments about sign language. Fifteen years ago, deaf people in Cambodia lived their silence in isolation. The first effort to develop an organized sign language in Cambodia began in 1996.At first they adopted the American sign language system because it is the most international. Deaf people from many places speak the same language! It is probably as much a universal language as music!

"Every moment and every event of every man's life on earth plants something in his soul."
Thomas Merton

Another good post bro. I am living vicariously through you by this blog! I can't wait to see more pictures.

Btw, my dad considers you a hero because of your ability to disrupt governments while leisurely scuba diving. Maybe you should go to Iran next and see what you can do for us there 😛

if ever you have pissed me off in my life i would have been on the boat over night with you and, as i write an getting sea sick just thinking about it, i would have thrown up on you…. much like, "the cat threw up on the couch". way to blame hassan's cat for everything. good times, good times.

I planned a trip out West with a friend when I was your age. He declined at the last minute. I went by myself, (great experience) and was never alone. Enjoy your freedom.
You've "walked the plank", traveled in a well- appointed cargo boat and soaked your head in salt water. YES!
With you all the way
Dad