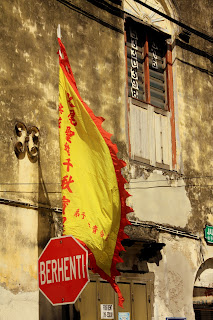 With less than three weeks until my return the world is beginning to spin faster. It is as if the planet itself is trying to gain enough momentum to launch me back into a society that moves at a different speed. Two days ago I was clutching to the back of a motorbike while it flew through heavy traffic, passing with only inches to spare between bigger vehicles, running red lights, and generally spending as much time in the wrong lane as possible. My driver and cohort was oblivious to my terror. I decided, as I felt the heat of another car’s brake lights on my knee as we swerved around it, that if I survived this journey I would write about it. Thus, you have the above. For I did survive, and in doing so I’ve discovered that I much prefer being the operator of fast and deadly vehicles, not the helpless passenger.

Despite said dangers, our unfaithful steed bore us to Penang National Park, where we trekked into the dense monkey-infested jungle and arrived, at great length and covered in sweat, on a fairly private beach pocked with massive crab holes. The blue-green waters spoke of  relief, so we shed our salt-soaked shirts and swam. Before long, we were joined by a cautious and stealthy sea otter which spent most of its time examining us from a safe distance. Its head would vanish and pop up elsewhere, not unlike Whack-A-Mole from the days of old.

I have finally realized why it is that monkeys feel the need to attack me. And really, it’s all their fault. You see, monkeys happen to instinctively identify bared teeth as a challenge to fierce physical combat. As such, when I laugh at their silly ways and silly faces, they think I am challenging them to a dual. And when a human duals a monkey, nobody wins. So should you find yourself confronted by a monkey with the silliest of faces, even if said monkey is wearing a jester’s cap, do not, under any circumstance, laugh at the monkey. For it will attempt to eat you, and it will start with your bare ankles. 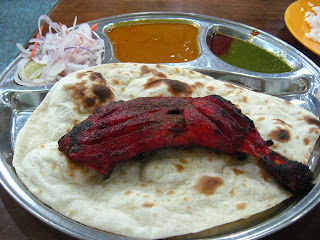 Almost without even trying, I’ve been celebrating Thanksgiving consistently since my arrival on Penang, Isle of Food. I must say, though, I’ve sampled all the top Malay dishes from local establishments, and they are all still trumped by Indian cuisine. As such, the image to the right was (one of) my Thanksgiving dinner(s).

I’ve been in Southeast Asia for nearly two hundred days, and I think I’ve avoided writing anything on this blog that might be seen as culturally insensitive. But all that is about to change. I fully understand that many different cultures use many different utensils and practice many different methods of eating. That is all fine and good. I like variety. When eating Pad Thai or any fried noodle dish, I would sooner take up chopsticks than I would a fork. When eating a sandwich or french fries, I use my hands. And of course, should I find myself eating steak, I think the most convenient tools would be a knife/fork combination. However, when enjoying Indian cuisine, the traditional method seems to be the use a single hand. By employing deft thumb movements, one can shovel food from the palm and remaining digits into one’s mouth. I used this method myself many months ago when I found myself sharing a meal of rice and chicken in the wilderness with a tiny Hmong girl. And after I learned the proper technique it worked quite well. 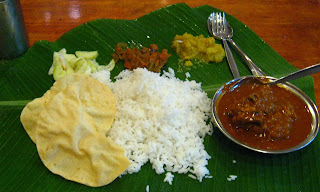 That said, eating heavily sauced rice with your hand is something that, even after a lifetime of training, can end in messy defeat. The other day I was sitting in a restaurant enjoying my meal with the spoon/fork combo. An Indian gentleman at another table tackled his with the hand method. As a result, he had curry and rice not only on his hand, but also spread about his mouth and on his shirt. I watched, amazed, taking another bite of rice and beef curry with my spoon. As another bit of rice fell to his shirt and I couldn’t help but think, “Dude, there’s just a better way.” So there you have it. Culturally insensitive or not, there are times when hand-eating is simply the inferior method. If any Indians (or other eat-with-your-handers) are reading this, feel free to sacrifice me in the comments section and defend saucy hands everywhere! 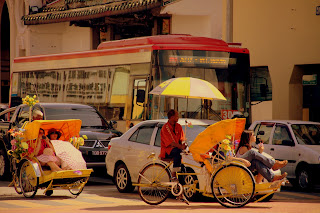 I’ll keep this brief, but I want talk for a moment about power. I believe that everything is relative. And I mean everything. Power is no exception. The most powerful person in the world is the person who has the most control over you, your life, and your decisions. Therefore, the most powerful person in existence, my dear reader, is you. Uncle Ben was right though, with great power comes great responsibility. What will you do with all your power?

Last thing consumed: Did you see those pictures above?
Thought fragment: I think, should I have such a grand opportunity upon my return, I’m going to opt out of the new TSA death ray scanners just to get the complimentary groping everyone is getting so excited about.

Your comment on power reminded me of Gandhi’s message of peace and non- violence; which holds the key to human survival in the 21st century. His salt march, his spinning wheel, his resolute determination as he took on the might of the British Empire has become the stuff of legends. What will I do with all my power? Hopefully make a wee difference in my lifetime as I'm sure you have made a difference in the lives of those you have encountered. Looking forward to your return. Peace out Grasshopper.