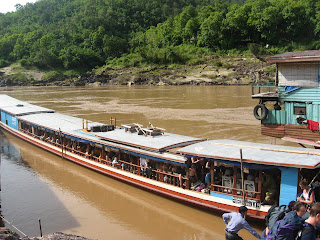 Chiang Mai fell away as each city often does when the time comes to move again. Sometimes it feels as if I am standing still and the locations are moving around me. This is the extent to which travel has become familiar. I’m not yet sure of the consequences of this phenomenon, or the persistence. Regardless, the world turned and I found myself on a long riverboat idling down the Mekong, bound for Pakbeng. I had crossed into Laos, finally entering the second country of this long journey after nearly two months in Thailand. Packbeng was simply an overnight stop, the halfway point on a two-day slow-boat journey to the town of Luang Prabang. The starting point of the whole venture, the border town of Huay Xai, actually turned out to be a legitimate place to spend time, primarily because I shared the Laos equivalent of a penthouse with three other travelers. Our giant rooftop terrace, though only four stories above the street, afforded us a view of the tiny city’s entirety, a flaming sunset, and the ever-moving Mekong. 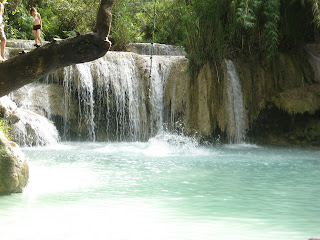 A different boat was used on day two and it filled with passengers to maximum capacity, even by Asian standards, with a few dozen travelers still standing on the shore. After a worrisome moment when the Lao boatmen began stacking wooden benches on the boat’s aluminum roof, they decided taking a second boat would be best. All of us remainders loaded onto the backup watercraft, which had no seating at all, but did offer plenty of floorspace. I spent most of the seven hour journey kicked back on the floor, watching the landscape slide by as if an endless green scroll. The green, rotund hills nestled together like eggs in a carton. Now and again small wooden structures stood stoutly on hill tops, sentinels keeping watch over the Mekong below. 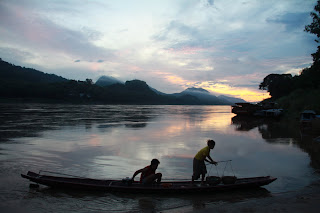 Here in Luang Prabang I visited a local waterfall, and with the shady advice from another traveler, discovered the hidden paradise pools at the top of the falls. We were able to climb/swim over to the very edge, a stone lip over which the water plunged into the pools far below. So if you ever visit Kuang Si Falls, hike to the “top of the falls,” when you reach the top of a wooden staircase that suffers from a broken fifth and sixth stair, take a right and plunge into the jungle, following the tiny stream, and you will find a Laotian Eden. And if you’re lucky, you’ll get there without any injuries or lost sandals. To add to the adventure, being that we were not on the official trail, or in any of the official clear-water pools, we did not get kicked out at closing as did everyone else within the Falls. So, upon our descent, as the sky’s blue began to deepen, we were able to enjoy the biggest pool and rope swing without the Lao and tourist crowds that had been there when we arrived. When we finally left, our faithful driver stood next to his songthaew in a otherwise vacant dirt lot. He simply laughed as we drove with wavering headlights into the darkness. 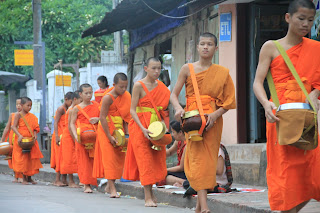 The World Cup final match began at 1:30 AM local time; by the time Spain finally claimed victory it was 4:00 AM. After my amigos staggered back to the guesthouse and passed out (partly due to the late hour, but mostly due to 2-for-1 cocktails), I managed to remain conscious. Grabbing my camera, I hit the still dark city streets, visiting the bank of the Mekong just as the sun began to peak over the horizon. I also was able to witness the monks daily morning tradition of walking the streets to accept alms. En masse, their orange robes shone in the morning light. At around 6:30 AM, my sleep-cycle plainly destroyed, I sat down at an open air cafe facing the Mekong and enjoyed a quiet breakfast of baguettes and an omelet. I am still recovering from the surreality, lack of sleep, cocktails, and that bottle of Laotian whiskey.

Shout outs go to the Toronto ladies of the two-day boat journey, Joanna, Kelly, and Cassandra, you are exceptional penthouse roommates and travel partners, see you in Vang Vieng! Chris of L.A., glad you waited around on that songthaew for 45 minutes, our detective work at the waterfall was awesome, as were our far reaching conversations, I have no doubt our paths will cross again stateside. To the Irish, Willie and Patty, it’s been a pleasure. Ichiro, I cannot believe I found you at Lao Lao waving around a Japan flag at the world cup final.

Last thing consumed: Fresh Spring Rolls and a Mushroom Sandwich
Thought fragment: When I pull out the maximum at an ATM, I get an exchange rate 8,500 kip to US$1. The maximum is one million kip, dispensed in a fat stack of 50,000 kip notes. I am a multi-millionaire here!

3 replies on “Spending a Cool Million on the Mekong”

Collin,
The introduction of this entry read like something historical; not present day at all. It seemed almost meditative. I enjoy reading your entries. I found myself remembering Pema Chodron's (a Buddhist nun) words. "To be fully alive, fully human, and completely awake is to be continually thrown out of the nest. To live fully is to be always in no-man's-land, to experience each moment as completely new and fresh."
Peace Out Grasshopper.

I finally managed to access your blog. it is 7:00 in the evening and the temperature here is nearly the same as you describe. The temperature is about the only thing we have in common on this day. One thing that does strike me, after reading your blog, is that there are some things that transcend distance and generations. Specifically, our desire to understand the world around us in all its rich diversity and, perhaps just as important, our place in this space and time.I envy you your journey on both counts. Aunt Teresa and I keep you in our daily prayers. It is my belief that this will keep us close despite the distance that separates us. I look forward to reading more of your travels. You are developing into quite the word smith.

Big Brother,
Your expressive, eloquent, descriptions bring me along on your journey and I am moved as you are moved by the people and experiences you encounter. I miss you so much…but even more I wish I was traveling with you. You have pulled me into your entrees with your words as great writers often do. I look forward to the next post, pictures, Skype conversation, and eventually seeing you again. Be careful….but not too careful!
I love you.
-Allyson