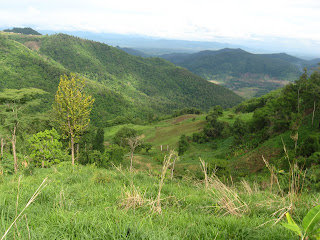 I spent my last night in Mae Sot with new friends, enjoying a shared Seafood Hot Pot, cold beer, and eventually a bottle of Sangsom purchased from a (nearly) closed mini mart. For this reason, I did not take the 8:00 AM direct bus to Chiang Mai, but instead opted for a more reasonable departure time of 1:00 PM to Tak where I could catch a second bus onward to Chiang Mai. Walking to the bus station, after nearly two weeks in the same place, I felt once again the lightness that comes from carrying all my possessions on my back. Momentum works both ways; the longer one stays in a place the more difficult it can become to leave it behind. I had grown very comfortable in the tranquility that Mae Sot provided, but disturbing this pattern brought forth a new yet familiar energy. I was, once again, in motion.

Exiting Mae Sot was almost too easy; I glided through the checkpoints without a passport, and once without being questioned at all. Sometimes it is a great help to be the Farang with a beard. Due to the first bus actually being a small van, my bag was strapped to the roof. Exposed to the elements as it was, I had a mild panic attack when a slow drizzle started coating the twisted mountain roads. It was a hefty stroke of good fortune that my driver, in a moment of grave compassion, paused in his quest to pass every large vehicle on a blind turn to throw a canvas cover over my luggage. For this I am eternally grateful, as should you be, dear reader, for this very laptop would have been destroyed without question by the gentle precipitation.

After arriving in Chiang Mai, my first order of business (after securing a place to sleep) was to find some sustenance beyond a small bag of fried banana chips, the snack which had been my sole means of appetite mitigation since boarding the bus back in Mae Sot. I found my way, along with a traveling couple I met on the bus, to the local night market. Though it was a weeknight vendors and their customers bustled about, exchanging coins for deep fried meats, noodle soups, and rice dishes. I ordered, by smiling and pointing, some saucy looking pork and steamed rice. It was delivered to me wrapped in a rich green leaf shaped like a pyramid.  The total cost for this meal was 20 baht (60 cents). 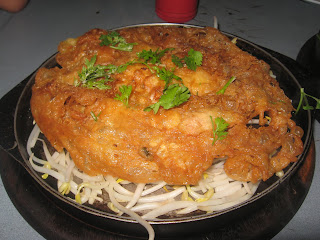 I spent the following day wandering the city, which is old enough to have dozens of elaborate wats yet modern enough to warrant sightings of McDonald’s, Starbucks, and, I kid you not, a pair of Jehovah’s Witnesses. My guest house is within the old city (the city center) which is enclosed within a large square brick-walled perimeter, outside of which is a moat-like river. In my wanderings, I discovered an amazing street food restaurant which opens at night in front of a Michelin shop. I have dined here twice now; once for their salty hot pans, which are delivered to the table still sizzling, and a second time for their fried eggless omelet. That is not the official name, this dish does not yet have an English translation. Trust me, I asked the owner. Imagine an omelet made with Thai offerings: chicken, onions, herbs, and a few other veggies – then replace the egg, which is holding is all together, with crispy fried battering. It comes out round like a pizza and about an inch thick on a bed of bean sprouts. Health-wise it probably ranks with a Big Mac, but it is far more savory. Both meals clock in at about 40 baht ($1.30).

After all this blatant consumption I was in major need of some physical activity – set to the tune of a 2-day trek into Chiang Mai’s nearby mountainous terrain. Day one involved a deadly 9km hike. The route was almost entirely uphill, weaving through humid, mosquito-infested jungles and over muddy streams. At one point a land slide forced our fellowship off the path. Sometimes the hard mud trail seemed ancient, pounded by generations of feet, while other times, due to recent rains, we blazed our own trail around marshy waters through tall grass stretching up to my shoulders. As we gained altitude, after a brief visit to a small waterfall, we began to use trails which cut through farmland and rice paddies. Our elevation began to afford us some incredible views, steeply rolling hills of farmlands and jungle. In the far distance, just on the horizon, we could see the grayish white blob of Chiang Mai. Finally, after miles of uphill battle we arrived at our destination: a small mountain village where we would stay the night. 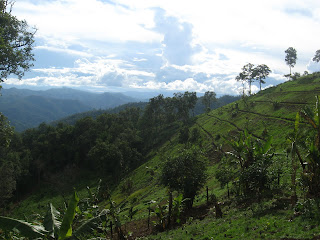 When stuffing things into my small daypack for this overnight adventure, I made one fatal mistake. I forgot to pack a second shirt. By the time we arrived at the village, the white shirt I had on was soaked with an immeasurable amount of sweat. I was forced to dry it over the campfire later that night in hopes of making it suitable to wear again the next day. We enjoyed the cooler mountain temperatures, played cards, stretched our weary muscles, and helped ourselves to a massive feast prepared by our constantly laughing guide named Pot. We all stayed up talking around the campfire until retiring, one by one, to the wooden thatch-roofed structure that served as our dormitory for the night. I climbed under the mosquito net onto my thin mattress at around 1:00 AM. The mountain roosters began yodeling in raucous voices at exactly 5:19 AM. Needless to say, despite the exhausting day, I did not get a restful sleep that night.

The morning, which arrived three hours after the roosters thought it did, provided us with much needed coffee and tea. Breakfast consisted of toast and a hard-boiled egg. Then we began the downhill trek, starting on rice paddy trails overlooking the fog-splotched landscape and working our way down to a magnificent waterfall. By the time we made it to this waterfall, my shirt was once again infused with sweat. It was at this moment that the shirt was demoted to the role of towel. Back down among the heat of thick jungle foliage, the waterfall felt like shards of ice. This is to say it was refreshing and also served as a much needed shower. 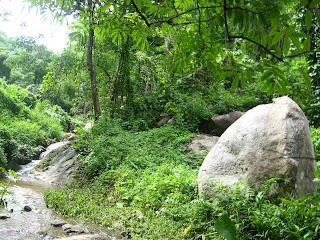 The remainder of the day consisted of a hot lunch (Pad Thai), elephant riding, white-water rafting, and bamboo rafting. I had the honor of sitting in the front of the raft as we tore through the churning rapids and nearly capsized twice. For the bamboo rafting, I found myself sitting in the center of the raft, which was about the size of two doors stacked longways end to end. There were four of us in total on the raft including our “driver” who was armed with a long pole for steering. About three minutes into our journey, we encountered a bridge with a single stone support pillar standing in the center of the river. A choice had to be made: left or right? The river chose left but our driver chose right. We ended up turning entirely perpendicular to the current, heading right for the stone pillar. As I was sitting in the middle, just before we collided perfectly with the pillar, I threw my feet up to try to absorb the impact. I managed to stop myself, but the raft moved beneath me, shattering and being sucked beneath the water. We were all tossed overboard. One guy named Tim was pulled by the current along the bamboo shards and then off down the river. I grabbed onto a piece of bamboo caught on the pillar beneath the water’s surface and held on until rescue arrived (a guy in a rubber raft). I’m happy to say we all survived the raft destruction without a scratch, except for Tim, who had several.

Back in Chiang Mai we all managed to meet up later for drinks to watch the Brazil-Netherlands match. The Brazilian in our group was sad to see Holland claim the victory, but I can’t help but think it was Karma, as he was our raft driver.

Shout outs go to the people of Mae Sot: Haanee, Nick, and Ruth. Desmond and Chris, I’m still waiting to hear how the Fourth of July Friendship Bridge Concert went for Godzilla Versus Congenital Mega Colon. Sonal and Andrew, I’m glad we were on the same bus, it was great hanging and trekking in Chiang Mai. To all the rest of the trekking crew: Tim, best of luck with the house on Samui, Mark, hope your second night went well, Ichiro, keep traveling man, your energy is an inspiration, Felipe, thanks for crashing the raft, you have given me a great memory, Luis, Tania, and Angel, best of luck in all future travels to all! Oh, and to Pot, our amazing guide and chef!

Last thing consumed: Spicy Isaan Pork and a Pineapple Shake
Thought fragment: There was a point during the past week when I had seven meals in a row all consisting of rice. I also took a Thai cooking class and I’m now a wok-master. Lastly, I tried fish jerky, which has an interesting soft, cloth-like texture, but has nothing on beef jerky.

Collin,
So, what was it like breathing in a higher altitude? Are the people who live there pretty self sufficient with regard to food sources or do they have to make that trek for supplies? Final question…electricity? I tried to see when Jehovah's Witnesses began their migration to Thailand but couldn't find out. I look forward to tasting your cooking when you return. I especially liked your introduction. Becoming "comfortable" applies to so many things in our lives. It is important not to lose momentum.
Peace Out Grasshopper

starbucks and pad thai….2 of my favorite things!

is there anything, food wise, that you really miss?

glad you survived the rafting event.

i now want a pineapple shake…and i need to get a wok.

@Susan I haven't looked up the actual altitude yet, I didn't notice any (above average) shortness of breath though. As far as electricity, the Thai government gave every village one solar panel. We didn't use any electricity while we were there so I'm not sure what they use their solar panel for.

@BA The food I miss the most is good cheese, good bread, tomato sauce and olive oil. I thought it would be Mexican food that I missed, but it's more Italian than anything.