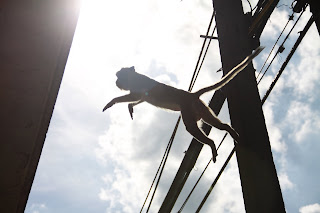 The “bus station” in Ayutthaya is actually just an extra wide street that buses all happen to park on. There is no ticket stand or information booth or any apparent organization at all. Because most of the writing on the buses themselves is in Thai, finding one that said “Lopburi” proved impossible. So I questioned the nearest vendor by gesturing toward the buses and asking, “Lopburi?” He answered with, “Yes, Lopburi, green, green!” Armed with this new clue, I walked back among the buses searching for a green bus. Almost immediately I caught a glimpse of a green bus pulling away in between two other buses. Jogging along next to the green bus, I called up to the windows, “Lopburi?” A Thai woman seemed to nod so I jumped on just as the bus began picking up speed. I found a seat and asked a different Thai guy if this bus went to Lopburi. He nodded and said “Lopburi.” This is how I made it to the city of monkeys.

Immediately upon arrival a pedal-bike taxi fellow agreed to take me to the guesthouse I named for 20 baht. While I should have been suspicious, it was so cheap I agreed without attempting to haggle at all. He pedaled me about half a block down the road. I honestly could have walked to the destination faster. But, I play by the rules so he got his 20 baht. After settling in, I walked around searching for lunch. I saw a handful of monkeys scattered about over the course of a few city blocks. I remembering thinking, hey, cool, the monkeys really do roam the city. I had no idea the extent of the infestation until I got closer to the Phra Prang Sam Yod temple. The monkeys were everywhere. On power lines, in the streets, on the sidewalks, on parked vehicles. Monkeys. Old monkeys. Baby monkeys. Monkeys sleeping. Monkeys chilling. Monkeys dodging traffic. Monkeys trying to steal food. And, eventually, monkeys jumping on me.

Feel free to check out this public Facebook album loaded with some of the monkey shots I took in the city. 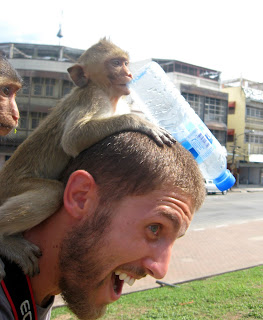 After a night in Lopburi, I headed further north via train to Phitsanulok. The city seemed both spread out and cramped at the same time. I was feeling a bit burnt out on going places just to see things, particularly ruins, temples, and perhaps even monkeys. I wanted to get my hands dirty. So I bailed on Phitsanulok as fast as possible and made my way to the town of Mae Sot, wedged up against the Thailand-Burma border. The city is full of Burmese refugees and has a smattering of NGOs attempting to provide humanitarian aid. I hoped someone here could use my help for a week or so. As it happens, after I arrived via some nauseatingly twisty roads, I found an English-speaking Burmese gentleman who knew of a school that was seeking English-speaking volunteers.

I met with the principal of Hway Ka Loke yesterday and agreed to help out in any way I could through next Friday. Hway Ka Loke is both a small school and boarding house for Burmese children, many of whom still have parents in Burma. I actually spent about five hours today actively teaching English in two different classes, trying to gauge how much English they already knew. Their skill levels are insanely varied, some seem nearly fluent, while some can barely muster a “Hello.” The ages in grade six, for example, range from 10 to 16 years old. Considering the wide range of ability, the nearly complete lack of resources, and the fact that I speak no Burmese, I am finding it quite a challenge. By “lack of resources,” I mean the classrooms are two walls and a ceiling, and I have a dry-erase board and marker. There are not even enough materials in circulation to ask the students to write anything. But, I’ll be doing my best over the course of the next week. While challenging, it’s pretty fun to walk into a classroom and have 38 Burmese kids stand up and say “Good Morning Teacher!”

Last thing consumed: Rice and grilled fish
Thought fragment: This guest house has a kitchen with a refrigerator. Being that I’m staying for at least eight more nights, I’m going to buy some cereal and milk. You have no idea how exciting this is for me.

Man, this is a crazy coincidence. I just read an article about a lady with a phobia of monkeys who went to a resort in Thailand to try to get over it. THEN SHE GOT MAULED BY MACAQUES!!!!! Now you have one on your head.

kick ass, man. wishing i was there. be safe–and brave, especially on two wheels!

Teaching is a good thing.
If you change the life of one child for the better, the world has been improved.
Dad

Hola Collin,
I can't imagine living among a monkey infestation..eeek… The healthcare provider in me thinks 'disease, disease, disease!' I am sure your teaching experience will not only make you more aware of how our world is scarred but also provide you with amazing encounters with others.
Peace Out Grasshopper.

First time I read your blog. I read it backwards, from your latest entry back to the beginning, and then I eyed the few belongings you brought with you. It's fascinating! Thanks for sharing your adventures! Peace and continued safe travels!