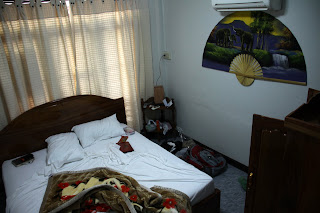 My first nights here I slept miraculously well, waking up refreshed just before the roosters began crowing. Last Friday, though, I was told my hostel room had been booked by another individual, and I was being kicked out. The hostel manager offered me a room in a separate building with a private bathroom for a cheaper price. The room looked fine, but the “pay-in-advance” request (and low initial price) was suspect. I soon discovered, through conversation with another traveler, that the room in question was home to a large family of bed bugs.

I moved to the guest house next door, where I found, much to my dismay, another room with a bug problem. Luckily, after mentioning this to the hostel owners, I was immediately moved to the master suite with air-conditioning for the night. This was mega luxurious and I slept fitfully in a queen size bed. The next night, I had moved back to the newly cleaned and supposedly debugged original room. At around 11 the bugs reappeared en masse. I had sprayed the bed with insect repellent as a precaution. Instead of repelling them, however, it merely killed them when they landed. The bed was covered with dozens of tiny bugs, of several different varieties. So I did what any reasonable person would do, considering the guest house staff had disappeared for the night and I had to be up at 7 AM to teach. I borrowed the key to the master suite from reception and slept there, waking up at 7 and vanishing without a trace. Upon further complaint of bugs, with the added visual of all the dead bugs on my bed, I was able to negotiate the master suite for the extent of my stay, for the same price, sans air-conditioning.

It has been a pretty comfortable week, though I’m sure much of that is a consequence of the relaxing nature of the city. When the days are filled with bike rides and teaching, and evenings are filled with exotic cuisine, good conversation, and the occasional Yoga class, it’s difficult not to sink into the slow-paced way of life. While I haven’t visited them yet, there is even a driving range (30 baht for a bucket of balls – US$1) and a public pool (30 baht entry – US$1). 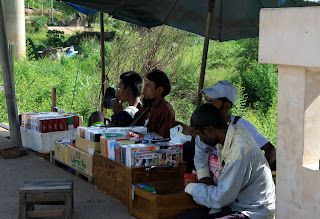 Last Sunday I rode a bicycle to the Burma (Myanmar) border where you can see the Friendship Bridge joining Mae Sot, Thailand with Myawaddy, Burma. The bridge extends over a shallow valley and a river, the no-man’s land between the two countries. This is one of the locations where the Burmese consistently cross into Thailand. Even in broad daylight, under the watchful eyes of the camouflaged, assault-rifle wielding border security, Burmese make the short trip by inner tube. The border-market, like the rest of Mae Sot, is permeated with illegal Burmese running illegal shops, most paying stipends (read: bribes) to the local police. The most interesting entrepreneurs, however, are the Burmese standing in the no-man’s land, selling a myriad of taboo items. Bottles of alcohol, cartons of cigarettes, and even items for various types of sensual enhancement, ranging from the innocent Viagra all the way to some suspicious products supposedly imported from India, are all available at a bargain price. If a uniformed guard is in sight, the vendors simply pull their products back into the no man’s land and out of the officer’s legal jurisdiction. 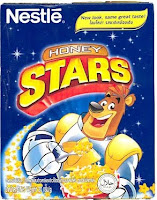 In my last post I mentioned briefly my excitement at the prospect of eating cereal. My first two (small) boxes of cereal contained six individually wrapped packages. Both were delicious from my perspective, but I knew a better value could be found in buying a bigger box, one not plagued with the “packaged air” of individually wrapped bags. On day two of eating the biggest, cheapest box of cereal I could find at the Hong Long Mini Mart (Honey Stars), I found an ant halfway through eating my bowl. I didn’t think much of it, and scooped him overboard, writing it off as one of the small tragedies of living in jungle terrain. Then I saw a second ant, floating helplessly in my milk, trying to clutch at a nearby Honey Star. The numerical inconsistency of finding two ants in one bowl of cereal did not add up. I knew immediately that I had been sabotaged. I knew, without looking, that my box of cereal, despite being enclosed in an eight-times-overlapped plastic bag that was itself enclosed in a cardboard box, had been overrun with ants. Then I looked. Dozens of ants crawled around inside my cereal box. My cereal box. They crawled, oblivious to their brethren that I had consumed unknowingly minutes before. Disgusted, I threw it all away, and resigned myself to a breakfast of toast.  The paint-your-own Shrek toy that came in my cereal box mocked me with his smile. I felt betrayed, betrayed by promises of sweet, crunchy goodness molded into celestial shapes. By my calculations, I ate somewhere between six and fourteen ants that morning. This is the story of the most disgusting thing that has ever happened to me, third-world traveling or otherwise. 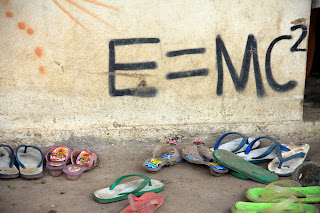 Teaching was rewarding, if hectic and exhausting, perhaps more so thanks to the third world environment. Classes were often, as mine once was, interrupted by a snake’s entering the room. The walls of the classrooms are simple thatch, with a five inch gap between the wall and the ground, making it easy for outdoor creatures to amble (or slither) in. The Burmese seem to have a unanimous and innate fear of snakes. I have been told that this is the case due to the lack of medical care they receive in Burma, and the obscurely high number of deaths by snakebite that occur as a result. At the time, I just tried to guide the snake back out of the room with a chair. In the later encounters I witnessed, the snake was mercilessly attacked with sticks and broom handles.

Snakes weren’t the only distraction. Dogs wandered around the school as well, often curling up for a nap in the shade of the classrooms. When it rained, which was often once per day, the ceilings would leak and all the flies in the area would migrate indoors. The air would become thick with them, as if a black, windblown snowfall had materialized inside the classroom. The kitchen is attached to the front of grade six’s classroom. Because of this, the few days that I taught grade six immediately before lunch I taught from within a cloud of white smoke leaking from the kitchen behind me. 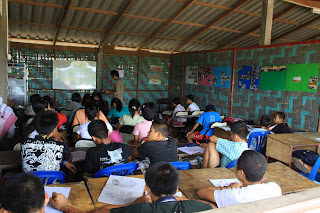 It was not all snakes and flies and sweat, however. Due to the fact that I speak neither Burmese nor Karen (kuh-ren; the regional dialect), I found myself engaging in a lot of Pictionary-style doodling on the white board as well as a sufficient amount of acting to define vocabulary words. My students were amazing. Despite what I perceived as fairly cumbersome learning conditions, they were incredibly polite, respectful, and attentive. Any time a student would walk past me outside of class, he or she would give a slight bow. They would stand to greet me when I entered the classroom and stand again at the end of class with a loud “Thank you, Teacher!”

At lunch I ate what the kids ate: a bowl of rice and potatoes topped with, on a good day, a scoop of greens and a chunk or two of beef. Once, though, lunch was just plain white rice with chunks of potato. Sometimes I would eat lunch with other teachers in the “office,” or with the students (who invited me into their boarding house) and have rudimentary, broken-English conversations. Other times I would take a chair out back and gaze at the farmlands sprawling into the distance, and mountains beyond them. There was always a good breeze out back, which was refreshing and prevented the ever-present flies from leaving the ground. When I left on my final day most of the students were outside, and all of them waved goodbye. Shout outs go to Justin, who saved me from bed bugs and shared infinite conversations on film and literature. Lisa, who tolerated such conversations and sat through the 90 minutes of no-scoring in the USA-Algeria match. Patrick, the rare, fellow Kentuckian whose wife teaches a mean Yoga class. Chris, the British teacher who drinks on school nights. Tom, who seems to live only in the present, many thanks for the seafood restaurant recommendation and treating everyone to ice cream. Julia of Australia, and Cristoph of Madrid, who attended the Burmese cooking class with Lisa and I. Min Min, my Burmese motorbike driver who I learned to trust even when driving the wrong way down a highway and, as happened once, through a rainstorm. To the numerous fellow volunteers and aid workers I met briefly throughout my nearly two weeks here in Mae Sot, you are an inspiration. And finally, to my over one hundred students, I hope, if nothing else, your hunger for knowledge is never satiated.

Last thing consumed: Samosas, Pumpkin Curry, Malay Noodle Salad, and a Honey-Banana shake. All prepared, thanks to a Burmese cooking class, by me!
Thought fragment: Riding a bike through the quiet streets of Mae Sot at 11 PM on a Monday, just after a good rain, smelling the dampness of the air, and listening to fat drops tinging and thonking and tapping on parked cars, restaurant awnings, and tin roofs, creates a most musical and therapeutic trip to 7-Eleven. Also, I had a gecko poop on my head today.

4 replies on “How to Survive Bugs in Your Bed, Cereal”

Best post yet! Sounds awesome man and glad we got to talk. Steve was sad he missed you

Collin,
This post had me disgusted (the bed bugs), laughing (the ants) and crying (the refugee families). At this brief moment you and these kids did share the bond of being strangers in a foreign land. The difference; you chose to be there with them. They have just chosen to flee injustice. I'm sure this was a truly transformative experience where your learning far exceeded theirs. I hope you will forever see with different eyes.
Peace Out Grasshopper