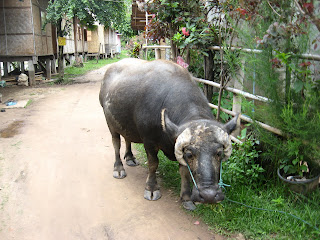 I have great difficulty doing nothing for extended periods of time. That is, stretches of inactivity almost always leave me anxious and craving some sort of creative outlet or physical exertion. I attribute this to the passing of time, which I’ve always seen as incredibly valuable, something not to be “wasted.” The longer I idle, the need for movement increases exponentially. But I found a place where time stands still. I idled for a full week on Don Det, one of the 4,000 Islands in Southern Laos, and during that time I craved nothing. The following is a passage I wrote while still on the island, outside of time’s grasp; perhaps it will help to explain the phenomenon.

My time here is spent reading, or thinking, or eating, or speaking. We do not multitask. Every morning begins with the croaking guffaw of a rooster, the giggles of children, the thudding of boat engines crawling up and downstream, pushing canoes of people with destinations. We do not feel the pull of time. Our daily decision is what to eat. Everything else is determined by the weather. When the sun shines we dive into the Mekong. When it rains we huddle together under shelter and laugh at the wind. We play with animals. We look to the mountains of Cambodia. We watch a cloud rise over the horizon, and watch it until it moves overhead and out of sight. Our limbs go to sleep and wake up and we never know. We watch sandals float downstream. We wait for the rain. We wait for the sun. We listen. We walk through the mud, which ranges from soppy and wet to firm, cold clay beneath our feet. We sleep at night. We sleep in the afternoon. We sleep in beds, in hammocks, and on the floor. We sleep in the sun. We sleep on wooden planks stretched out over the Mekong. We eat with our hands and flick ants off our arms. The bottoms of our feet have become rough and gray. We eat and drink together. We watch whirlpools form in the Mekong, like aquatic dust-devils. We feel the winds of approaching rain. Sometimes the wind lies, and the sun returns, and so we laugh and dive into the Mekong. We fish and catch nothing, then retire to the floor cushions from the effort.

We take guesses at when it will rain during the day. We drink at nights, and sometimes during the day, too. We watch naked and half-clothed children play on the dirt path. We watch naked and half-clothed children play in the Mekong. We play in the Mekong too. Every evening dragonflies claim the sky as their own, demonstrating aerial superiority in the hundreds. We look at the mountains of Cambodia in the distance. We look at the water buffaloes chewing grass in the path. We look at brown cows standing in rice paddies. But mostly we look at the river and the sky. The painted clouds are sometimes too bright to look at directly. Sunsets press the deepest reds and oranges into the backs of our eyes. When the clouds slide on, a vast starscape sprinkles the sky like spilled milk, a promise of lands even further away than this one. 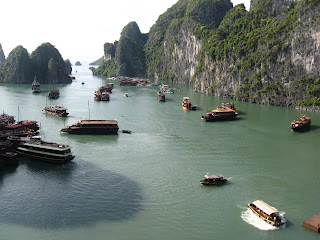 After a full month in Laos, I began a sixty hour journey by bus from Si Phan Don (the islands) back to Vientiane and then onward to Hanoi. I assumed it would be awful. But, I have learned the joys of buying Valium over the counter in third world pharmacies, so I slept quite peacefully for a majority of the journey. I’ve now crossed into Vietnam, and I’ve already spent a day cycling around through Hanoi’s chaotic traffic. It’s great fun. I’ve now spent a night on a boat on Ha Long Bay, sung Karaoke in Vietnamese fashion, and leaped from the top deck into the emerald waters at dusk. I’ve also spent a night on Cat Ba Island and hiked to Ngu Lam Peak in Cat Ba’s Biosphere Reserve, which boasts a rusty five-story tower from which one can witness a panorama of green. The island itself was overly touristy, so I spent the evening on the roof of the hotel with some new friends. We watched the the tiny motorbikes fourteen stories below and looked out at the hundreds of glowing boats anchored in the bay. The roof was a hierarchical array of cement, with small staircases leading to smaller cement platforms climbing just a bit further than the one before it. On the highest of these ever-climbing platforms stood, for some unknown reason, a heavy marble altar. To raise oneself atop this pedestal is a frightening and exhilarating experience. When you look to the horizon, in any direction, you cannot see the roof; you cannot see that on which you stand. In your heightened state of awareness, you sense only the warm, salty gusts of wind from the bay and the faint horns of traffic far below. It is very simple, you are standing in the sky, and the sky is all there is. 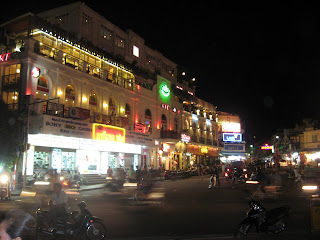 I apologize for the massive delay on this posting. I’ve had almost zero internet connection for the past couple weeks. Jungles and oceans don’t often support wifi, unfortunately. But, I assure you, Wanderlust has not been forgotten. I will now attempt to remember all the amazing people I’ve encountered over the past two weeks. Shout outs start with Adam, the Canadian I met in a hotel’s gym in Pakse (though neither of us was actually staying at that hotel). Thank you for breaking the six-day streak of no-English-speaking from which I was suffering. Motorbiking around the Bolevan Plateau was wicked. Nazim, owner of the Indian restaurant in Pakse where I ate four meals. Ollie the red-head pot-head. Howard and the other Adam (and Figaro!). Sara of the Netherlands. The other Matt and Devina, hope your wedding goes off without a hitch. Claire, the wittiest Australian I’ve ever met. All the French with unpronounceable names. Seesi and his family at Peace and Love bungalows on Don Det, thank you for the hospitality and the many meals we shared. Oliver, the Israeli in the bus station in Pakse, glad we had a couple of hours to wander the market and grab some food. Sara and Jorgie of the Drift. Matt and Colin from Top Pub in Hanoi, perhaps we’ll meet again in Seoul someday. The Ha Long Bay crew: Sara, Kathryn, Paul, Rachel, Constance, Alistair, and Luis (I’ll be elated if you manage to upload your photos to Facebook). Sander of Cat Ba Island, best of luck being a father! Most recently, Ellina, the brothers Mathias and Mike, “A”, and Yusif of Hanoi. Bia Hoi and street food again tonight?

Last thing consumed: A smorgasbord of random things, from squid to fried chicken to baked fish.
Thought fragment: A cold glass of beer can be purchased on street corners for 4,000 dong. That is twenty cents U.S. Go ahead and read that twice.

Collin, I enjoy your writing. I feel as if I'm traveling with you and enjoy watching your heart expand as your feet gather dust. I couldn't but help think of the wisdom of others. There is an indigenous proverb [I know not the author] which teaches: When the river runs fast, sit still in your canoe. And, Gandhi once remarked that there is more to life than speeding it up! As you continue to keep vigil of your surroundings, may your journey continue to be filled with blessed surprises. Peace Out Grasshopper

It's great to read a post again bro! Loved the pics on facebook too! Keep moving and keep writing

Good to hear from you again. I figured you had no service. Well, your nearing your halfway point……does it feel like it ? Better go to the spa and get the bottom of those feet scrubed. Be safe !!!