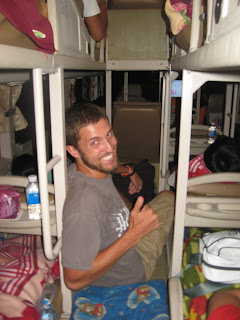 My exit from Vientiane was far from graceful. During the three days I was there I managed to see every nook and cranny of the central city, including their Arc de Triomphe replica (still the tallest structure in the city) and Xieng Khuan (Spirit City), a park which is crammed with sculptures of Buddhist and Hindu deities and some weird shamanistic stuff as well. I also grabbed my Vietnam visa from the embassy, as Vietnam is the only Southeast Asian country that does not provide visas at the border. Punks. Because my 7 AM bus was canceled or full (difficult to discern with the language barrier) I was moved to the 7 PM V.I.P Sleeper Bus to Hanoi, which would drop me off in Lak Sao, one small city away from my goal of Ban Khoun Kham (my base camp to visit the epic Kong Lo Cave). As it turned out, the sleeper bus was also full, and I was given a dirty pillow and directed to a spot on the floor in the aisle. Let me clarify, a sleeper bus is a bus with three rows of beds. This means two thin aisles run the length of the bus, and it was on the floor of one of these aisles that I would spend about 11 hours. The “thumbs up” photo is in the first 15 minutes. I mostly practiced Yoga positions in the dark. I’m only half joking.
The good news is that the bus driver did successfully manage to drop me off in Lak Sao during a downpour; I was able to catch a bus to Ban Khoun Kham that allowed water in through the ceiling, all of which seemed to drip on me. This is not that uncommon, I have been forced to wear rain jackets on buses before. So it goes. The downpour became torrential as I arrived in Ban Khoun Kham at about 8 AM and I jumped from the bus directly into a roadside shop. I looked out into the rain and wondered where I was. The shopkeeper and her friend sat behind me, chatting in Lao and giggling, likely at the dripping and clueless white guy standing before them. Out in the gray I saw a blur of blonde hair moving beneath a green umbrella. Could it be, another foreigner? I ran across the street to meet her under the covered wooden bus stop. She turned out to be a French girl and was able to tell me that the town consisted of (for all intents and purposes) the single street on which we stood. On the verge of consciousness (I only managed to get about an hour of sleep on the bus floor), I found a guest house, bartered for 20% off, and (after securing a quick meal) slept for four hours straight. I wandered back out into the street in the afternoon. The rain had stopped, and I was finally able to take in my surroundings. Massive green mountains rose up in all directions, thick clouds of mist leaking out of them. Livestock roamed the streets, goats and cows enjoying an afternoon walk. The market actually had some things I had never seen before, including severed cow legs (still bleeding a bit), and rats that appeared to have been turned inside out. The rats looked like hideous, 3-D anatomy diagrams, but they were “for eating,” according to ladies at the market. I politely declined.
The following day I made the 90-minute journey by songthaew to the launch point for Kong Lo Cave. We only got stuck in the mud once! I’m happy to report that all the effort in getting there paid off. I boarded a wooden canoe with a German fellow and two Lao boatmen. We set off upstream along the river which ran the entire 7.5 km (nearly four miles) of the cave. It wasn’t long before we entered the cavernous darkness, stalactites reaching down from ceilings unseen, even with the boatmen’s headlamps. Thick columns of water draining from above would appear briefly from the shadows, flickering as our guides would attempt to maneuver around them. Occasionally they would fail, and I’d throw my jacket up as a shield as we sailed right under the showers. Caves always offer a unique surreality, their absolute blackness and silence a natural void, just beneath the Earth’s surface. Caves, especially ones as ancient and epic as the Kong Lo, present the nigh-organic malleability of stone. A stalactite is rock, but it grows. The cave itself is carved by the river that runs through it. Stalagmites reach up to meet their creators. It’s a good place to be. 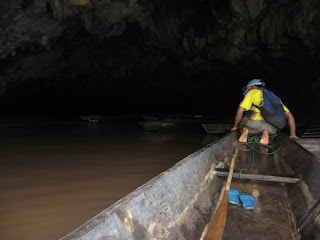 It is certainly refreshing to be out of the bigger cities. I’m finally encountering real Laos, the rough, rural side of it not found in capitals and tourist towns. I cannot enter Vietnam until August 5th (and I have to leave Laos by August 7th), so I’m moving South until I hit the border and then I’ll start backtracking. I’ll try to find myself in a bigger city on the 5th so I can begin the massive journey up to Hanoi. After Ban Khoun Kham I moved on to Tha Khaek, then Savannakhet, and I’m currently in Pakse. I keep finding myself on the banks of the Mekong, which is fitting as we both travel slow and steady. I can’t help but wonder if I’ve watched the same water molecule flow by twice. The internet is almost nonexistent down here (and forget about wifi). Not only did I go about five days without any connection (at no consequence to myself) it’s also been six days now since I’ve had a conversation with a native English speaker. It’s a strange type of social isolation; the people are there, but the language is not.
My trip is now one-third of the way complete. I was eating Indian food last night and compiling a list of all the places I’d been so far (in order to, at some point, update the Journey section of the blog). My food came out before I finished. It’s currently at about 24 cities, islands, and jungles.
Shout outs go to Greg (again), Ben, Tara, and Chris – the awesome adventurers of Vientiane. Kai Toh, my guesthouse owner in Ban Khoun Kham, whose broken English provided accurate bus times. And Aude, the French girl, who graciously let me borrow her umbrella while I trekked through the rain in search of a guesthouse.

Last thing consumed: Rice and Vegetables (oh joy….bring on the chili sauce)
Thought fragment: I got my hair chopped off today today, thought it was cheap at $3.75 – turned out to be a full service salon, with multiple shampooings, conditionings, and scalp massages. Nice. Also was able to use the local Champasak Palace Hotel’s gym for free. Double bonus. Lastly, I wonder if I should have posted a photo of the rats…I think some of the more sensitive readers might have ruined their keyboards.

I do enjoy reading your posts. This story of movement and adventure. Movement; like the Mekong. I liked that reference. I continue to be amazed by your encounters. I hope you are amazed and surprised everyday! "“In everyone's life, at some time, our inner fire goes out. It is then burst into flame by an encounter with another human being. We should all be thankful for those people who rekindle the inner spirit.” This quote was written by Albert Schweitzer. It sounds as if everyday your fire is sparked with no chance of going out. What an amazing journey. Keep on walking. Peace out grasshopper

That is totally my teddy bear pillow that you are sleeping on in the aisle. It's ok though cause I stole Kelly's for the remainder of my journey claiming that is was mine from the beginning! I'm glad it served you well!!!

@Joanna Actually, that's the pillow the bus gave me to use, maybe the same design though. I left my two-day boat pillow back in the Vang Vieng hostel by mistake (still wrapped in plastic too)!