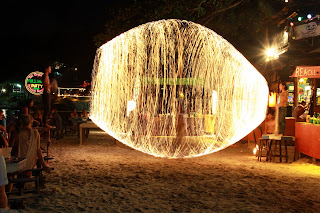 Every night on Had Rin Beach grew more and more chaotic as the moon approached its critical mass, the vital signifier of the infamous Full Moon Party. It was kind of incredible to watch the build up; my first night I had to entire beach to myself, by Full Moon there were an estimated 20,000 people dancing in the sand. Everything was on fire. Thai guys spinning balls of fire and flaming sticks, occasionally on stilts also set aflame. Should one wish to risk their own skin, one could jump in a flaming jump rope. Or through a flaming hoop. There was also flaming limbo. Fire breathers lit up the night along with black lights and glowing neon paint on everything, including (or, perhaps, mostly) people. Massive speakers thumped along the entire stretch of beach and stall owners hawked their goods, which for the most part consisted of alcohol. Not sold in a glass or a bottle, mind you, but in a bucket. Think of the kind of bucket a child might use to build a sand castle, then fill that bucket with ice, upturn an entire bottle (about a third of a liter) of Sangsom (Thai rum), then fill the rest with one of many available mixers, a choice which includes the Thai version of Red Bull (more concentrated than the Western variety) or any other energy drink. The kicker, buckets only cost 100 to 300 baht ($3-$9) depending on the quality of liquor desired. It’s easy to see where so many people find the courage to participate in activities such as the flaming jump rope. Walking the beach at sunrise was, as one might imagine, both surreal and disgusting. The orange globe revealed everything, and everyone, in their true state. I won’t go into the details, but the things and people left behind after hours of heavy drinking should not be seen in full daylight. I don’t mean to detract from the experience, however, as my seven nights on Koh Pha Ngan were delightful. 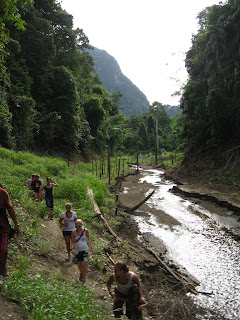 I bid farewell to the island and headed for Khao Sok, a national park, dense jungle, and home to creatures great and small. While there, I encountered numerous bugs bigger than my thumb in my bungalow, a gecko on my bed, and multiple blood-sucking leeches. This was the kind of place where having mosquito nets over the beds was standard procedure. On my journey to Khao Sok, I ended up in the back of a pick-up truck modified with benches along the sides and a roof, which came in quite handy as we plummeted through the rainy darkness sporadically lit by flickering lightening. It was on this death ride that my path crossed with two fellows from London, two girls from Holland, and a guy from Boston (another American, rare!). We formed a group and were able to get a 1500 baht day trip into the jungle for just 1000 ($30). This garnered us a trip deep into Khao Sok where we got an hour boat ride across a lake gouged by limestone cliffs and thick foliage. The Jurassic Park theme song played in my head constantly. We also got to explore/climb/swim through a cave with headlamps. The rainy season had just begun, which often brings flash floods which submerge the cave system quickly and without warning. Apparently eight tourists drowned two years before. Our guides just watched the clouds and said “once inside, keep moving, don’t stop.” So that’s what we did, at some points swimming in water which, despite being crystal clear under the headlamps, had no visible bottom. Between climbing ropes up freezing waterfalls and watching out for the hundreds of bats squeaking overhead and occasionally flapping by (not to mention their guano), there wasn’t much time to worry about flash-flood induced deaths. Oh yeah, and the cave was also home to deadly, poisonous spiders.

Following the jungle, our newly formed travel group headed off to yet another island, this time Koh Phi Phi. It is where I am now enjoying some of the most beautiful beaches I’ve ever seen. An all-day snorkeling trip two days ago (500 baht/$15) brought us not just to some choice snorkeling spots. We also got to kayak from the boat to a beach that was home to dozens of monkeys which climbed about on the kayaks and hopped around dodging the incoming waves. We also had the opportunity to visit the beach where the movie The Beach was filmed. For anyone who has seen the film, it’s a gorgeous and iconic locale. White sands stretch to the perfectly blue waters, held on either far side by great limestone cliffs reaching to the sky. 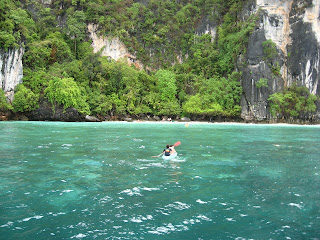 I have had a stroke of bad luck, however. I acquired some sort of jungle cold in Khao Sok which I carried with me to Phi Phi. Now that I am overcoming that minor illness, I have contracted Conjunctivitus in my left eye. Three of us all got it nearly simultaneously, and now we are all reasonably paranoid about touching anything. A trip to the pharmacy got me a small tube of Fucithalmic which will hopefully cure my eye because I am seriously looking like that guy from District 9 when he is turning into an alien. I plan to hang here for however many days (hopefully less than five) it takes to get back to normal health. Once I’m ready to be on the move again I’ll make the long trek back to Bangkok and start city-hopping my way up to Chiang-Mai.

I’m trying to keep this from growing too long, but I also need to mention the fire show gone wrong in Khao Sok. It was the fire spinner’s first show at a Reggae bar and partway through he let go of one of the swinging fireballs which flew towards our group and, about a foot before making contact with the Bostonian’s face, thunked into and wrapped around the low bamboo railing. We all stared in shock for a moment as the fireball sat blackening the bamboo an arm’s length away from our table. The firespinner grabbed it back and quickly rode off on his motorbike. If not for the feeble bamboo rail and the precise angle at which the ball of doom was released, we would have had a burn victim. There is something to be said here on the subject of safety standards, but there is also something to be said for a good story.

Shout outs go to the Khao Sok originals: Nigel and Steve of London, Tamara and Petula of Holland, and Josh of Boston who saw his life flash before his eyes as the fireball flew toward him. The crazy Thai guy on the snorkel boat, thanks for letting us all use your dry-sack.  The newly married Jo and Duncan, good luck on your future travels. Darren and Emily of England who keep reappearing everywhere. Rihanna, also of Holland. Desmond, definitely do your diving on Koh Tao, not Phi Phi.

Last thing consumed: Chocolate Chip Cookie (purchased to access the cafe’s wifi)
Thought fragment: The fanciest and most expensive dinner I have had thus far was at a Western-ish restaurant called Unni’s. My chicken fajitas cost a whopping 250 baht ($7.50). Halfway through dinner a massive, orange, hard-shelled bug crawled onto my remaining tortillas. This is the only time I have had a bug in my food in nearly a month of Thailand dining. But we did have a chandelier.

7 replies on “Fire and Water”

Man, it sounds like the adventures just keep on coming! I really wish I could be there. Also, I hope your eye gets to feeling better.

@Harrison Thanks man, maybe after you graduate we can do Sri Lanka, India, Nepal, etc 🙂

so so sorry dude did everyone get the dreaded death eye, steve looked like he went 12 rounds with tyson!

Perhaps the bug was to be dessert 🙂 Glad to know your eye is clearing up. It sounds as if you are meeting some amazing pilgrims on your journey. I love what Mark Twain says about travel.
“Travel is fatal to prejudice, bigotry, and
narrow-mindedness, and many of our people
need it sorely on these accounts. Broad,
wholesome, charitable views of men and things
cannot be acquired by vegetating in one little
corner of the earth all one’s lifetime.”
Peace out Grasshopper

@Nigel Yeah, we all got it except Rihanna who is about to escape unscathed. We'll see though, she's on the same route to Bangkok as me so she may get it yet 😛

@Susan I am a fan of that Twain quote as well

Man, it seems like the epic journey of a lifetime already. I can't believe you have already been gone for almost a month. Keep the cool stories coming for all of us still floating along back here in the states.

It is always a pleasure to read these bro!

@Susan That quote is awesome!!!