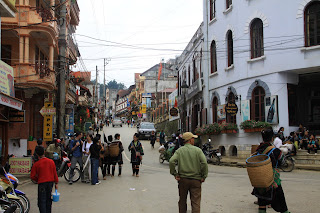 Not until Sapa has an offer of, “hey mate, ya wanna grab a beer,” escalated into such an eventful and multicultural experience. I had arrived in a daze at sunrise after taking a night train to Lao Cai (on the Chinese border) and then a minibus onward, so I passed out immediately upon finding a bed. After sleeping into the afternoon, I wandered to the open window to discover that Sapa truly was a City in the Clouds. Mist shrouded mountains descended into green waves of rice paddies, with spots of clouds floating both above and below. I wandered the town for a while to get my bearings and was followed all the while by a persistent entourage of ethnic minorities attempting to sell me handicrafts. When I returned to my hotel (which luckily offered an affordable dorm room) I met a dread-locked hippie who had been living in Sapa for two months. He was just heading out for a drink and invited me to join him. I soon found myself in the company of a handful of other foreigners who had found themselves “stuck” in the wondrous mountain frontier. Our numbers at the corner Bia Hoi were outmatched by Hmong women, all of whom seemed familiar with my dread-locked friend and the rest of the western crowd. It turned out to be the birthday of one of the Hmong women, and the celebration continued over dinner at a nearby restaurant which included countless shots of apple-flavored “happy water” (otherwise known as rice wine moonshine, served by the shot from a plastic water bottle). By the night’s end, I was half-carrying my new friend back to the hotel, guided by a small Hmong girl who happened to know the way.

It was through this meeting that I came to know many of the locals on day one, and I quickly found myself entrenched in Hmong culture. For a time I spent my days helping to fix up a local school (founded only six weeks ago) and my nights watching the clouds slide through the streets from various food and drink spots around the small city. It’s easy to see how someone could get very, very comfortable here. After a few days the Hmong women in the streets came to know my face, and more often waved in greeting instead of sales attempts. I had moved up in status from the typical weekend tourist. And by chatting with the girls on the street, I again met the one who had led my friend and me home on my first night. With surprisingly good English and a mischievous smile, she told me of a long path to her home village, “it special way, more beautiful, tourist do not know. Long way also, tour company no sell because tourist cannot walk so far.” So I hired her as a guide on the spot. 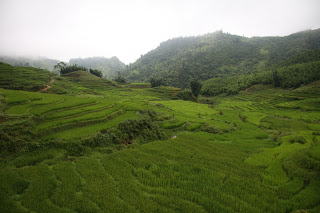 The following day I looked down upon the cascading rice paddies, splashing together and consuming one another, endless in their attempts to reach the sky. Mountain winds pressed against us, not threatening but a firm reminder that we were very far from home. My tiny mountain guide stood on thin legs and grinned at me.
“You think it beautiful like postcard?”
“Yes, Ha, I think it is more beautiful than a postcard.” Her grin spread into a wide smile,
“You are happy.” It wasn’t a question. Just a statement of fact. Having learned English by talking to tourists on the streets of Sapa, Ha had her own eclectic way of expressing things. She often led our conversations into the philosophical, talking of life and love. “Someone can be very big on the outside,” she told me, “but sometimes on the inside they are not so big.” Later she would calmly explain to me the threats of opium addiction, parents selling their children, and poor medical care. I met one of the “sold” children. “They will tell the baby when he is older so he can go find his brothers and sisters.” She taught me the ways of rice and water buffalo, and in the same breaths spoke of friends who had died. “No worry, we all die for sure. Maybe I see her in second life.” I watched her as she stared out at the infinite green that was her home, and I knew she was also staring down the countless adversities that stood before her. And as I watched her squint into the wind with eyes brimming equally with dreams and sorrow, I realized that in that moment my new friend was a stronger person than I could ever hope to be.

After three hours of walking, climbing, and fighting squelching mud paths, we stopped for lunch on some rocks next to a river. I pulled a small bundle of tightly wrapped plastic bags from my day-pack, food which Ha had purchased back in town, and watched as she systematically opened them and spread the contents across her lap and on a nearby rock. The three bags contained a healthy slab of roast chicken, steamed rice, and a delicate mix of salt, chillies, bamboo, and lime. The previously gentle rain began to pick up, so we traded off the job of holding the umbrella while we ate with our hands. Three village children sat nearby under their own umbrellas and watched us, seemingly fascinated. I’m not surprised, really; I had barely seen any other locals over the past hours, much less any foreigners, just as Ha had promised. 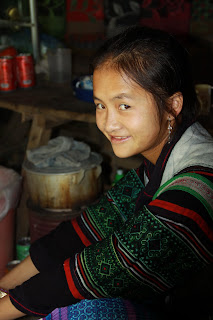 When we arrived at the target village, Lao Chai, the tiny homestay had no food to provide. Ha suggested walking on to another village, Ta Van, with a better homestay. An hour later, in perfect darkness, we reached our destination. In total we had traveled about fifteen kilometers and visited five villages. It turned out that the family that owned the place was just sitting down to dinner. And the meal turned out to be the biggest and best I have had since entering Vietnam: chicken with bell peppers, pork with carrots and onions, fried spring rolls, steamed rice, boiled cabbage, my personal favorite, cow stomach, a couple dipping sauces, and, of course, “happy water.” The following morning, after a short three hour hike to a waterfall, we reached a road where I was able to charter a motorbike to take Ha and myself back into Sapa.

I will remain here for a few more days (at risk of needing a visa extension later) if only to further absorb this wondrous place. I fear that when I inevitably return it may be changed, perhaps, beyond recognition. Shout outs go to Tetsugoro (from back in Hanoi). Glen, dread-locked master of Sapa, I am lucky to have met you. The ladies of Holland Yanniek and Diona. Martin 1, professional dumpster diver and married to a Hmong woman, thank you for dinner. Red-bearded Peter. Shu, founder of the local school which is still so new that there isn’t even info on her website yet. Claudio. Sebastian (damn you for buying Tequila shots). Tom, hope your foot heals. Cedric. Martin 2. The countless Hmong who have shared their lives and their smiles, but in particular to Ha, who has changed my life forever.

Last thing consumed: Chicken and rice
Thought fragment: I made the delightful mistake of buying a a few souvenirs. Now, with the requirement of shipping a box home via a two-month slow boat, I can’t stop buying all the amazing handmade stuff. For lack of a better term, I’ve been Hmonging out.

2 replies on “A City in the Clouds”

Thich Nhat Hanh, a Buddhist Monk who was exiled from Vietnam for his peace activities during the war, says “People usually consider walking on water or in thin air a miracle. But I think the real miracle is not to walk either on water or in thin air, but to walk on earth. Every day we are engaged in a miracle which we don’t even recognize: a blue sky, white clouds, green leaves, the black, curious eyes of a child — our own two eyes. All is a miracle.” I delighted in reading about your walk with your new friend. Ha seems to have the same open heart as Thich Nhat Hanh. Perhaps my heart also enjoyed Vietnam so much because I am reading about the roots of someone I have grown to love from the eyes of a stranger to that land. May you continue to appreciate the beauty and wonder of each moment of life as you walk. Peace Out Grasshopper.